The Mill and its Environs

How would you like to live in an environment as beautiful as this? 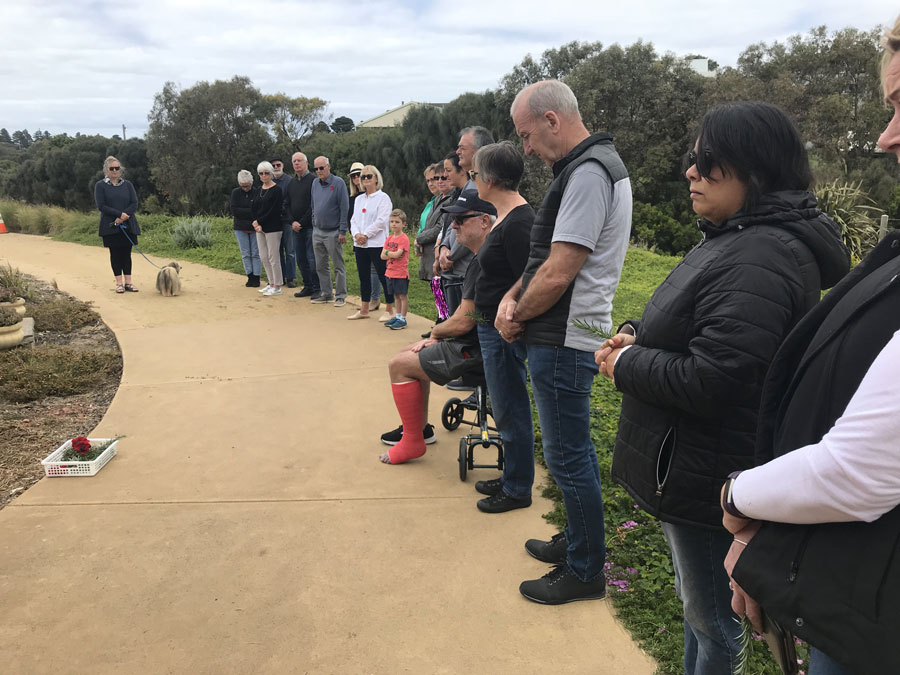 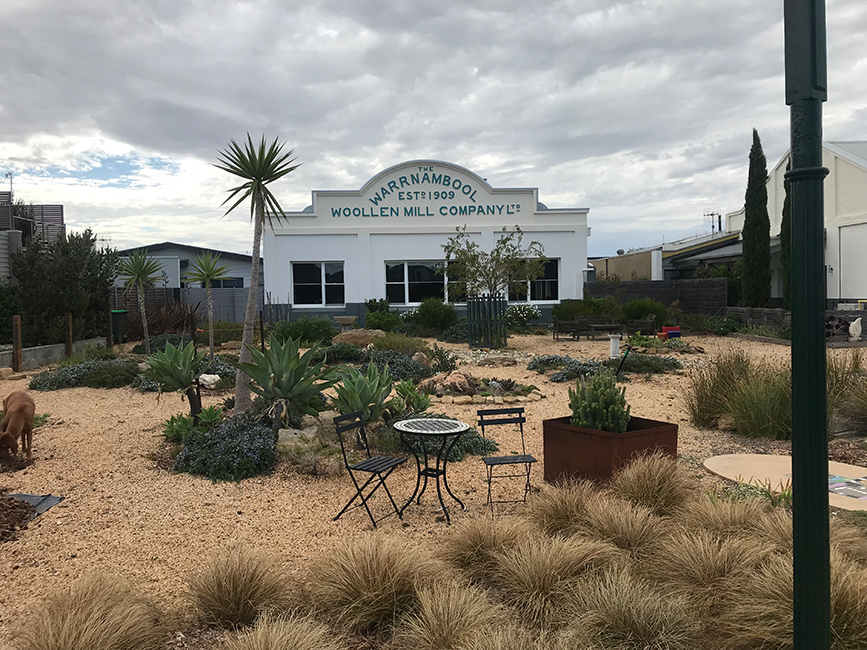 THE MILL AND ITS ENVIRONS OVER THE YEARS

A Story Compiled by Anne Sims 2019

We who live at the Mill share a unique and beautiful part of Warrnambool bordered on the northern end by a sandstone cliff, with the Merri River to the west, stunning Lake Pertobe on the eastern side and the rugged coast to the south, much as it was when European settlers arrived in the early nineteenth century. According to James Dawson (the noted 19th Century writer on aboriginal culture of the Warrnambool area) the original tribes here were Mopor, Peek, Wuurong and Kirrae Wuurong and it was not until the early 1900s that the name Gunditjmara was first noted. Middens left by these early tribes have been discovered over the area, along the two rivers and the coast in particular, the closest at the bottom of the Mill development, on the banks of the Merri.

In those early times it was recorded as “thick bush…sand hummocks and swamp” (Yule & Sayers p.4). Today there are still remnants of bush along coastal areas, sand-hummocks still line our beaches protecting land from sea, and swampy areas still lie within the South Warrnambool area, at Salt Marsh and beyond, including what has become our beautiful Lake Pertobe, alive with birdlife and frogs. The relentless Southern ocean still pounds our rocky shore, roaring day and night, and the Merri River, channeled by hand in 1859, still meanders through the countryside.

Today’s sport’s grounds at Jetty Flat began in these earliest times with a cricket ground, an area for special events such as New Year’s Day celebrations, plus horse racing. It even became an airfield later on when the early planes came to Warrnambool in the 1920s and 1930s. The Jetty Flat area still hosts cricket (though no horse racing nor airfield), athletics, tennis, bowls, a pigeon-racing club, plus a state of the art BMX track and mini golf.

Much has changed however. Early townspeople lived in tents, timber huts – very basic accommodation – then came prefabricated huts made from “black corrugated iron, wood-lined and papered with all the necessary fittings complete.” (Vidler p.65) Naturally, these fittings did not include those we expect today, such as gas, electricity, hot and cold running water etc. They were very basic homes which must have been very hot in summer and very cold in winter, having no insulation.

In the 1850s Warrnambool was still a “scattered place full of wombat holes and the people were very friendly and sociable…there was timber everywhere, plenty of aboriginal natives, kangaroos, emus etc., no made roads but only tracks wandering through the bush and few fences.” (Vidler p.59) South Warrnambool however, then called Jetty Flat, was possibly the busiest and liveliest part of town, because of the port. Pastoralists who had been settling along the Merri and Hopkins river valleys since the 1830s, needed transport for their goods and supplies, and the overland journey to Melbourne was long and arduous – so much quicker by sea. For this reason much time and money was spent on developing the harbour and maintaining it as safe and reliable.

By 1854 people were starting to build with stone. There was little heating, no refrigeration, candles and kerosene lighting, irons were heated on the stove top, and there was no running water. As well as that there were many children to manage. Backyards were busy places with a rain-water tank (no town supply until 1893) the legendary “long-drop” toilet (serviced weekly by the “night cart” called the “nightman”) plus a pit for hard rubbish, as there was no regular rubbish collection the either. Food scraps would be thrown to the chooks or pigs or composted. All this as well as the vegetable garden, fruit trees, domestic animals plus wandering kangaroos, emus and wombats. Times were so different…and imagine the smells. All that smoke, smelly Lake Pertobe, rotting seaweed, the night cart, roaming and backyard animals – hopefully all blown away on our notorious wind.

How those early settlers must have struggled in this harsh environment. Homes were scattered over the higher ground and many families were as self-supporting as possible, keeping a cow, poultry and possibly other animals for meat, eggs, butter etc. They kept vegetable gardens and fruit trees and the women baked their own bread in the old “wood stoves” – no running to the shops for supplies, no telephones for delivery service and no electricity or gas in homes in those days. “Take away” could not have been even imagined.

The area around the port at this time was a series of smelly, marshy areas infested by mosquitoes, snakes, and other vermin, where the ocean at high tide often flowed over the top of the coastal sand dunes. It flowed over what is now Lake Pertobe and into the meandering Merri River mouth at Salt Marsh and even as far as the now Harris St. soccer ground. It was not an inviting habitat for the average family with just dusty or boggy tracks, often impassable. It was understandable that due to difficult access, many port workers chose to live there, close to their employment, developing a strong sense of community that still exists today.

In 1869 it was decided to build a meat preserving factory to process produce from local farms. The site chosen has become “THE MILL’ complex we live in today and where the original Warrnambool Woollen Mill began in 1874. The meat works was built in this place for several important reasons. It was flat, dry land close to the port; there was plentiful water supply from the Merri River (the “Merri Cutting” having been completed in 1859); building materials, in particular Warrnambool limestone, were relatively cheap and readily available; sheep and cattle were plentiful plus the climate was cool. An imposing factory was built but only survived for a very short time, closing in 1872.

A group of local businessmen had opened a woolen mill at Woodford and some wanted to move it closer to town. When the meat works site became available another group of local businessmen including the directors R. Hood (Chairman), R. B. Paterson, Joseph Ware, William Rutledge, F. Tozer, A. Kerrand and James Steele (Manager), bought the nine acres plus buildings. There was great dissatisfaction and opposition from the Woodford shareholders but in 1874 the first WARRNAMBOOL WOOLLEN MILL was established. A further important reason for moving the Mill here was the horse-drawn tramway, opened a few years earlier in 1858, providing easy access for coal to be delivered to fire the furnaces for steam to run the looms etc.

By the 1870s there were storehouses, factories, public buildings including hotels, plus homes and community sporting grounds as well as the port facilities in Jetty Flat. What an interesting society it would have been. Children, as children did in those times, played safely outdoors in “gangs” to protect their patch from outsiders, and the men drank together, sharing their work and worries at the hotels. And where were the women? They certainly would not have had the time or opportunity to chat regularly over a cup of tea with friends, nor gather at hotels like the men. Their lives would have been full tending gardens, animals, children plus seeing to household chores. How different our lives are today.

During the following decades there was steady growth in Warrnambool and many plans were made to improve facilities in town and at the port. Not all of these plans however came to fruition and some were disasters. In the early days there was no effective town water supply. Following a huge fire in 1856 in the town’s largest store in Banyan Street, the need for a fire brigade had been recognised. A system of pumping water from springs at Cannon Hill down to a ‘stand-pipe’ on the corner of Liebig and Timor Streets was successful for domestic use. Water carts took water from the pipe to wherever it was needed – at a price. In 1882, when Warrnambool Woollen Mill was gutted by fire, only 8 water carts arrived to fight the fire. The service was totally inadequate and all was lost at the mill. The burnt ruins remained as a sad reminder, until 1909 when the second Warrnambool Woollen Mill ‘rose from the ashes’ becoming a successful enterprise.

In the years that followed there was both excitement and frustration amongst the Warrnambool community. There had been much discussion and planning, plus rejection and disappointment over the years to improve the harbour by building a breakwater and in 1884, after many years of struggle, a plan was finally accepted and an exciting change came to Jetty Flat. Two huge steam-driven cranes were brought from England to assist with the building of a breakwater to shelter the harbour. One crane, nicknamed Goliath, was set up at Jetty Flat to stack and load concrete blocks to be used in construction of the breakwater. The other, Titan, was mounted at the jetty to dredge the seabed and place the concrete blocks as required. This created much new employment (plus interest and noise no doubt) and there was a burst of renewed activity and optimism in the area. After completion of the structure in 1890 there was more excitement and employment. A viaduct was built over marshy land leading to the jetty so the newly arrived railway could access ships at the wharf. Silting however was a continuing problem and it was soon realized that more work was needed to fix the problem. It was almost another two decades of planning and rejection until this work was carried out. Sadly the breakwater extension proved to be badly done and required further time and money to be repaired. Imagine the frustration and anger caused.

Meantime the South Warrnambool State School was opened in 1881, and until 1994, over 100 years, was the centre of local life, with dances, Sunday School and other community activities taking place regularly. It was also at this time that gas lighting was installed in the streets making it safer to be out and about at night, and thus, improving the environment again.

As previously mentioned, the railway had been completed to Warrnambool in 1890 when the tramway to the port, which had operated successfully for 30 years, was taken over by the railways. Rail was so much quicker than transport by sea and this led to further distress in the South Warrnambool community as businesses started to use rail to transport goods. The use of the port declined followed by much unemployment in the area. Many people left at this time and went to Western Australia to the excitement and promise of the goldfields – leaving behind a period of depression in Warrnambool. It was a period of slow progress here but one item of interest was the planting of our iconic Norfolk Island pines along Pertobe Road in 1903-4.

The building of the second Warrnambool Woollen Mill (1909) was the beginning of a new era in South Warrnambool, and when the empty Mill was sold in the year 2000, nearly 100 years later, the Patterson Family bought it with the dream of building a unique medium density housing development, which has now become a reality. How lucky we are to be living their dream in this stunning environment.